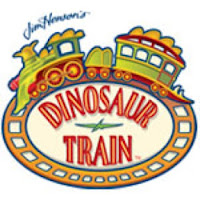 My two year old has been so excited by the adverts for dinosaur train for ages now so he was over the moon on Monday when it started on Nick Jr.

As always, we sat down and watched it together, I'm not complaining, I love dinosaurs! Doesn't everyone want to be a palaeontologist at some point or other?

You can tell that this cartoon has had input from early childhood education experts, science educators and palaeontologists - the information in it is correct!

Little buddy is a dinosaur who was adopted as an egg by a different species - a family of pteranodons, although he is one of the family, they go on trips via the dinosaur train to try and discover what species Buddy is (a T-rex).

The train can go through a time travel tunnel so we can learn about dinosaurs that wouldn't have lived in the same period. 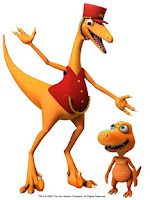 There are bits which are repetitive on purpose to help children repeat difficult dinosaurs - my two year old has mastered Stegosaurus and stygimoloch already!

And lots of cute bits about working together and the importance of family.
I like some of the detail such as the conductor, a troodon, using his large claw to punch the train tickets! 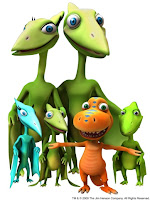 The show has been carefully created to start out with a question to answer and details have been kept accurate - such as which time period flowers appeared etc.

Each show is 22mins long, there are 40 episodes and are currently running as double episodes at 4pm weekdays on Nick Jr.
Aimed at children aged 3-6 to encourage scientific exploration and promotes critical thinking. Prehistoric and natural history curriculum based.