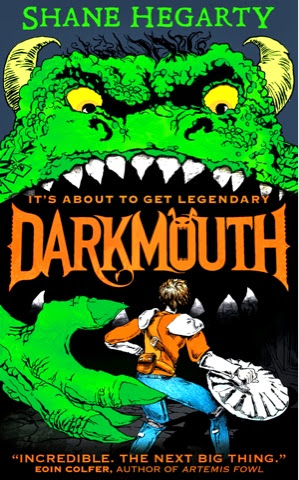 The book that can’t wait to get its teeth into you!

Darkmouth by Shane Hegarty is a brilliant tale full of monsters "legends" and is full of adventure and imagination sparkers!

It's aimed at children aged 9+ but I'm being a little naughty and reading carefully selected parts of it to my very "Halloweeny Monster Obsessed" five year old and although we haven't finished the story yet, so far we are BOTH enjoying it very much!

The book has full page illustrations inside which are just fantastic, great detail - and I just love that there is a map of Darkmouth in the front - as a kid, I was always a fan of the books with maps and I think we can all agree that all kids love a good map!

I love the style of this book, and all the monsters - or should I say, Legends are ones that you will know - Minotaur, Hydra, Chimera and Manticore are just a few that are in this book - with more books to come in the future!

The book tackles the importance of family and friendship  - with the fate of the world resting on the shoulders of 12 year old Finn ... who tries really, really hard! 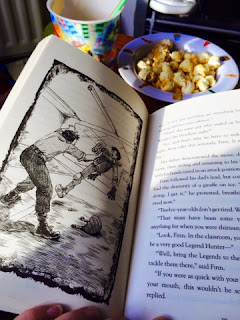 Darkmouth
A monstrously funny debut from the new star of middle-grade adventure.
THEY’RE COMING!
Legends (also known as terrifying, human-eating monsters) have invaded the town of Darkmouth and aim to conquer the world.
But don’t panic! The last remaining Legend Hunter - Finn - will protect us.
Finn: twelve-years-old, loves animals, not a natural fighter, but tries really, really hard, and we all know good intentions are the best weapons against a hungry Minotaur, right?
On second thoughts, panic.
PANIC NOW!
• The BIGGEST LAUNCH for HarperCollins Children’s Books in 2015. Acquired in a hotly contested auction at Bologna 2013 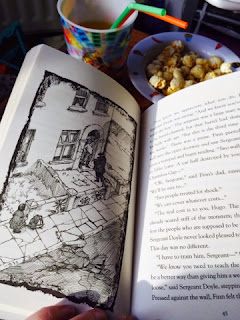 • Following Darren Shan and Derek Landy, comes the next HUGELY talented Irish author... Shane Hegarty. For 9+ readers, DARKMOUTH is fast-paced, funny and a little bit frightening. Arm yourself for the first book in an supernaturally sensational new series
• MONSTER-SIZED, out-of-this-world marketing and PR campaign – details coming soon!
• A deluxe early proof edition will be available
“Shane Hegarty explodes into the fantasy universe with Darkmouth. An incredible debut. Hilarious and exciting. Terrifying and heart-stopping. Everything a great fantasy series should be. The next big thing is here.” Eoin Colfer, author of Artemis Fowl
“Believe the hype. The relationship between the young hero and his father is touching and real. There are touches of Ghostbusters, along with some Bond-like gadgets, plus a rather Dickensian setting (the mist-swirling town of Darkmouth). This fantasy adventure is a stunning debut.” Sarah Webb

There's also a competition running on the Darkmouth website to win a limited edition tshirt.

Disclaimer - I received a copy of the book for the sole purpose of being able to review it.
at February 02, 2015