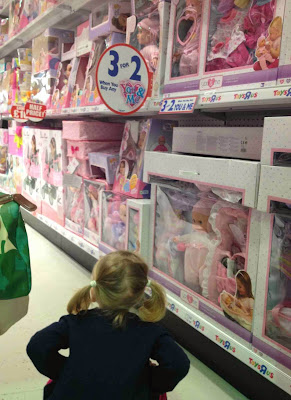 You pop into any shop selling toys these days and you will see a plethora of toys available in a colour everyone can enjoy and then some sort of hideous bubble gum pink version. For example, we were looking at a toy keyboard, it was available in Red (targeted at boys with a photo of a boy on the box) and then the same thing in Pink (for girls).

Why on earth they couldn't demonstrate red for every child to enjoy and really if the product is really really needed in a second colour, does it have to be pink?

The girls toy section is also easy to spot because the majority of toys are either pink or packaged in pink - girls are definitely not given a variety of choice in colour at all.

I do not like pink, I feel the colour is forced on girls from a young age and I feel that the mass of pink (and only pink) toys targeted at girls is horrendous, there's not much opportunity for a girl to like other colours.

Same applies to clothes too - the majority are all various miss-match shades of pink, It's near impossible to find matching pinks even within the same shops! 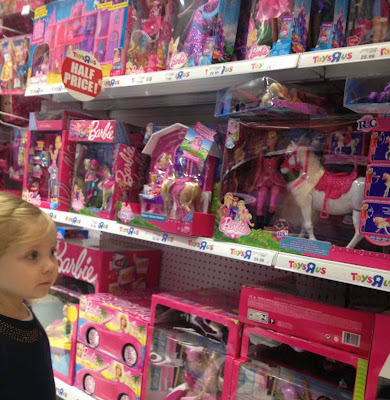 Which leads me on to Barbie ...(I was a Sindy fan as a kid) Barbie seems to be more and more "pink" even her caravan is pink (I'm sure it was yellow back in the 80's) - Heck, there was even a Barbie horse in white and pink! ... but its not just the pink overkill that puts me off letting my daughter have a Barbie - it's simply that this product is targeted at young girls and currently advertising on Nick Jr (a channel dedicated to PRESCHOOLERS, and also one I happen to love.) my 2 year old daughter gets to see adverts for tat like the Barbie nail bar - stick on nails, nail varnish and such all being advertised specifically at girls aged under 5 - really? false nails for toddlers? that seems like a really bright idea! Joining the club on the inappropriate make up front is that awful shoe brand full of adverts with swarky voices and always with free make up - since when has it been OK to give make up to preschoolers when they buy their shoes?!
When I pointed out to my husband the inappropriate nature of the product considering that 1. This was being advertised on a channel dedicated to under 5's and 2. That Barbie is for young girls  - far far too young for make up!... Husband wondered how I'd missed the Barbie augmented reality make up counter that means that really young girls will be encouraged to apply make up and use iPads ... Aimed at girls age 3 plus - am I the only one who thinks we should NOT be objectifying our 3 year old daughters and that they are too young for make up Augmented or not!

I do joke about banning pink and I do try and discourage pink for my 2 year old little girl, I always politely request no pink in gifts (ALWAYS ignored!) but I don't mind the odd bit of pink here and there, what I do very much mind is the ridiculous current pink overkill and companies such as Barbie and targeting make-up at preschool girls. If Barbie and Lelli Kelly et al want to advertise it's products between episodes of Peppa Pig on channels especially for toddlers - perhaps they could make their product a little more responsibly and appropriate for the age they are targeting? Just a thought!

I'd like to think I'm not a minority here but given how popular things like Barbie are, perhaps it's a sad state of affairs where the majority of people are ok with make up for toddlers and preschoolers and girls ONLY being allowed pink!

#banpink the world is a very colourful place to be :-)