My shark bite and other tales of scars! 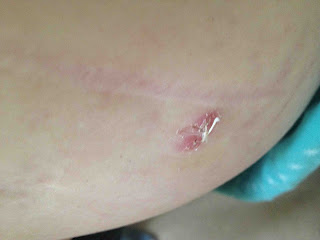 I've been a bit quiet lately on the old tinternet (not just my blog but twitter, facebook, instagram and pinterest too!) - it's all because I've had a little operation and needed recovery time, something I'm having a debate about writing so maybe (or maybe not) i'll get all up close and personal but for now I just want to get coming to terms with new scars off my chest (metaphorically and not literally, I was not lucky enough to undergo a boob job)

You see I already have scars on my abdomen, I have two great big whoppers from childhood kidney disease, the first was along the front right side where I had an op to fix my kidney. The second is along my back right hand side where a few years later the "fix" failed and a rather diseased golf ball sized kidney had to come out.

I've always been a bit self conscious of the scars, they're pretty huge and happened in my teens but also I'm proud of them as they represent a difference between life and death. To help deal with them, a friend helped me come up with an imaginative and extremely elaborate story (ok, ok, a big fat lie) as I'd been to Florida on holiday a few months after the second op, the perfect opportunity presented itself!

I was bitten by a shark! (Dun Dun Dunn!) at various points all sorts of wild extras popped into the story, it pretty much started off with me floating in the sunshine on a Lilo float at Daytona beach or sometimes the florida keys and variations have included things such as me punching the attacking young great white square in the nose to frighten it away, seeing its void eyes roll back, retrieving a lodged shark tooth from my lowest rib, being pulled from the sea Baywatch style, and being relieved to have kept hold of my designer sunnies throughout the ordeal (for the record, despite always hankering after a pair, I have never ever owned designer sunglasses for the simple reason that I am extremely clumsy!)

That amazing story was believed by plenty of late teens in rural Lancaster (where I grew up) and continued for many many years after! In fact, it was even mentioned in the speeches at my wedding because even grown men have fallen for the shark bite story!  :)

When I was facing my latest operation, apart from being terrified and irrationally convinced I was likely to be that "one who didn't make it" I also had to come to terms with facing 4 new scars in 4 new locations across my wobbly tummy. At first I was of the "what the heck, more scars isn't going to bother me is it?" attitude,  but actually the more I thought about it, the more it did bother me, my tummy was an absolute wreck already, scars all down one side, stretch marked to oblivion from growing two babies, wibbly wobbly from excess weight I just don't seem to be able to shift - it's already an eyesore - 4 more scars would just make it horrendous!

But actually, my 4 new scars are laughable! When I had the dressings on I didn't think they were too bad but I didn't peep under the dressings because I was still afraid to see and because the seeped blood stains and sharp pains freaked me out.

When it was time to remove the dressings I was going to take a personal moment to do it alone but my two little people (2 and 4) were extremely curious and so we took the dressings off together.

Firstly I was surprised at just how small 3 of them were - honestly not much bigger than fly bites! The 4th, the "big one" is only about 1.5" long!

Secondly, their clever locations mean two are very well disguised! one is hidden in amongst my old kidney scars (see photo of disgusting looking scabby bit) and one is actually inside my tummy button!

They are healing well although still have disposable stitches poking out and still quite fresh looking but I'm confident that they will be bearly noticeable in no time! My biggest problem will once again be my extra wobbly father christmas style tummy instead of fresh scar tissue!


My tummy is my own personal map of my whole life story. It starts with life - the tummy button, there's a tiny mark which is left behind from having my tummy pierced at 18,  the kidney scars represent bravery and survival, the stretch marks are signs of love, not just the love for my children - the love it takes to make two and grow my amazing babies, the new scars tell a whole new chapter and the wobbly bits are a reflection of my addiction to pizza, chocolate and fizzy pop at the weekends!

Anyone facing scars must make up their own scar story :-) 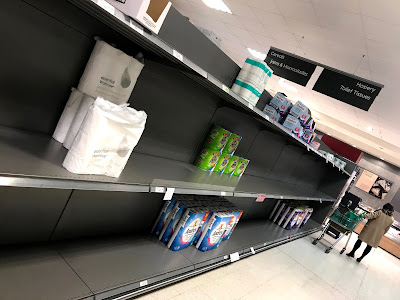