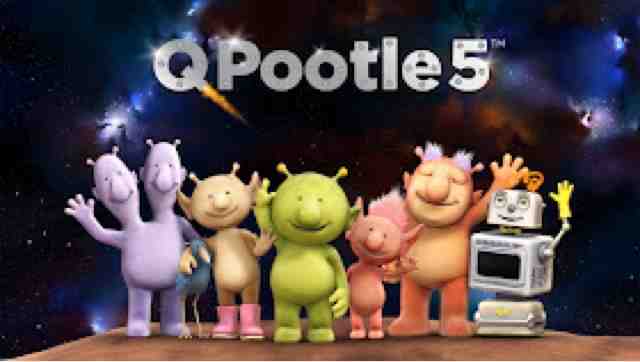 There's a new show on cbeebies!

Nick Butterworth's book, QPootle 5 has been re-imagined into a fun show to be hosted on Cbeebies and will air daily from:
Monday 29th July at 8.15am

You can get more updates on Q Pootle 5 via its Facebook page at https://www.facebook.com/QPootle5

Space is a fun place to be with Q Pootle 5!
Out there…amongst the millions and billions of stars is a little planet called Okidoki. You might be able to see it if you look very closely…along the Milky Way, just past the Gold Top Nebula. This magical planet provides the perfect playground for a friendly little alien called Q Pootle 5.
Join Q Pootle 5 and his friends Oopsy, Eddi, Stella, Ray, Groobie, Bud-D and Planet Dave, as they tackle the everyday problems of the final frontier.
There’s never a dull moment on Okidoki. Stranded on Crumbly Moon? Help is at hand. A planet with a temperature? No problem. A party hat for a two-headed friend? They’ll find one that fits . . . or maybe two!
Friendship is at the heart of the series. With fun and engaging stories, and rich and nuanced characters, space is a fun place to be with Q Pootle 5.
Q Pootle 5 features the voices of Ed Gaughan (Bunnytown, Black Mirror); Joanna Page (Gavin & Stacey, Poppy Cat); Steven Kynman (Thomas & Friends, Fireman Sam); Richard Ridings (Peppa Pig); and Ella Kenion (Cuckoo, The Hive, Swashbuckle).

Main Characters
Q Pootle 5 is the central character. He’s fun, easy-going, kind, and resourceful. He’s a leader without being bossy. There’s nothing he loves more than spending time with his friends – they look up to him, but he doesn’t really notice.
Oopsy is Q Pootle 5’s best friend. She’s excitable, impetuous and OK, a bit gung-ho! Oopsy has the most infectious giggle in the galaxy. She loves to dance and draw..
Eddi is one person with two heads. A worrier who’s often in two minds! He doesn’t mean to be rude but he can sometimes be, how shall we say, direct! Eddi is a bit of a techie and can often be found tinkering with his spaceship.
Stella is creative, offbeat and independent. She loves growing things in her garden and she’s very generous. She plays the bagpipes (there’s room for improvement) and she lives with her bird, Ray.
Ray is a major bird who doesn’t like heights. He’s grumpy, offhand and lazy. But Stella loves him to bits!
Groobie is very jolly, very obliging and rather disorganised. He runs a café-cum-store and if he hasn’t got what you need, he’ll almost certainly be able to get it. He plays the piano in a style somewhere between Les Dawson and Jerry Lee Lewis.
Bud-D is Groobie’s right-hand-robot. He’s loyal, enthusiastic and cheerful, but not always that reliable.
Planet Dave is a giant of a friend. He has the patience and wisdom of someone who’s seen it all in his four billion years. He spends a fair bit of time dozing, but he loves the company of his friends from Okidoki. For a planet, he gets involved more than you might think.

Q and A: The Making of Q Pootle 5 with Nick Butterworth (Executive Producer, Production Designer and Writer)

Nick Butterworth is a multi-million selling, award-winning author and illustrator. His books include Q Pootle 5,thePercy The Park Keeperseries,Tiger,Albert Le BlancandThe Whisperer. Nick has sold over 15 million books worldwide and his books have been published in more than 30 languages.
How would you describe Q Pootle 5 as a show?
Q Pootle 5 is a fun and exciting show with friendship at its heart. It taps into the world of young children where imagination always trumps reality!
And how would you describe him as a character?
Q Pootle 5 is a friendly and fun-loving person who has a real sense of adventure. He’s very kind and loves spending time with his friends. He’s good at solving problems – but he’s not infallible – sometimes it can be a problem of his own making!
How did Q Pootle 5 make the jump from book to screen? Tell us about the creative process
The idea came from my two books, Q Pootle 5 and Q Pootle 5 In Space. My son, Ben and I initially looked at the two books and the characters that we felt could be developed. Ideas would arrive very quickly. For example, one of us might suddenly ask, “Where does a character live?” and from this, we might develop a number of ideas, not always related to the original question! It was very satisfying when one idea sparked another.
Of course we wanted to maintain the integrity of the original books, but the possibilities that animation offered, the creation of a world with movement, voices, music and sound effects, inspired us to take things further.
Snapper is a family company – what is it like working with your family on the series?
Speaking for myself and for my wife Annette, who is also deeply involved in the production process, I can say that it has been a real pleasure. We each have individual strengths and areas of responsibility. But we also have a certain amount of overlap.
What do you love about Q Pootle 5?
For me it has been hugely satisfying to be able to widen the scope of what I have been trying to do in the field of children’s books. TV is a much more collaborative process than publishing. Working with Ben and Annette has allowed me to work with people I like and respect towards the common goal of creating a high quality, narrative based children’s TV series.
What makes the show appealing to the pre-school audience (and parents)?
Space is exciting and intriguing to people. The series has diverse, strong stories and rich nuanced characters that people can identify with. There is a lot of fun and laughter in the series and some very tender moments too, which all seem to really resonate with children and parents.
Why did you choose to create the show in CGI?
CGI gives us the opportunity to create very real environments and we knew with the right animators – and Blue Zoo are very much the right animators – we could realise much more
of our vision for the series. Being able to move and fly through the world and space in thre
dimensions gave us so much scope for storytelling.

Q and A: Ed Gaughan is the voice of Q Pootle 5

Please see my other Competitions http://emmainbromley.blogspot.co.uk/p/competitions.html