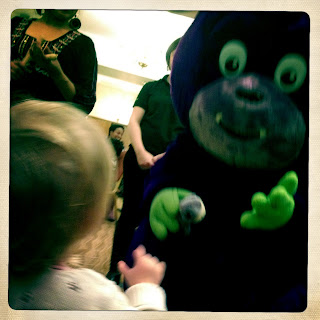 It's been a year since the nursery nurse supporting our local health visitor team told me that Blake had a problem with his speech clarity - I'd thought she was wrong as Blake has always been a chatterbox and his first word at 8 months wasn't 1 but 2 words!

However, I took him along to a drop in session at Downham  leisure centre on Moorside Road - we fall on the border between Bromley and lewisham.
The wait to see a therapist was only a few mins and the initial assessment showed he did have a clarity issue on some sounds such as "s" but this wasn't uncommon for a 2 year old. He was put on a list for a full assessment.

A little over 6 months later, he had a full assessment, again with only a few mins to wait to be seen) which showed that he was still having the issues with clarity - although he has an impressive volcabulary! The therapist said she would refer Blake to ENT to check there isn't an obstruction or deformity and she would pop him into a therapy group.

So, I get a call ... finally - a whole year after Blake was first seen. A place has come up in a group - starts in less than a week's time and is mid morning on his only full preschool day. I don't want Blake to forego his only full day at preschool for his last few weeks with his friends, I don't drive so its not like I can take him later - and I don't have alternative childcare for Meg at such incredibly short notice - not easy to arrange either! What if I'd been a working mum too!  I explained that day and time isn't suitable and I'm told the only other time is in September when he should be starting school - this session would also be mid morning on a week day. So there isn't actually a suitable, realistic or achievable session available for my child, there's no choice and no alternative at all. It's taken a year to reach absolutely nothing at all, no help at all and a dead end.

Lewisham takes over a year to actually get round to organising something ... Which is then offered to the parent at less than a week to organise and also offer child therapy sessions at the most inconsiderate and ridiculous time without any alternative choice at all. The drop in sessions for an initial consultant is weekly, doesn't have any waiting times or used to its maximum capacity - When I'd been to the drop ins before I was worried about how long I'd need to wait to be seen (it was only a matter of minutes) the receptionist at the centre told me some weeks nobody turns up at all and usually its only 1 person on the weeks that someone does!

... We are still waiting for the ENT referral that the therapist was organising for us half a year ago.

To wait a year might not be a long time for most lewisham NHS services but in the lifetime of a 3 year old and their speech development - I'd say that waiting time is significant! Would you wait a third to a quarter of your lifetime for an appointment?  The service overall is clearly poorly managed and badly organised.

I've had far more useful, quick and instant advice from the "I CAN" charity (great resources on their website) who we met with at their Mad Chatter's Tea Party. The Lewisham service has just been an upsetting waste of time. To go through this for a whole year without any help from Lewisham only to reach a dead end is just heart breaking and the woman I spoke to on the phone couldn't care less  or offer any advice- just passes the blame on to others in her team, nice.

Update - Since this post, I had a follow up phone call promising me sessions over the summer, an ENT appointment we've waited for since february finally scheduled for August.... and another phone call today retracting that promise for sessions, but with a hint that there could possibly maybe  be something in September ... during the only week of the year that I just can't commit too or maybe something patchy with the odd session here and there but obviously I would have to find alternative childcare at short notice in the summer holidays when everyone else gets to go away because Blake's younger sister isn't welcome.
At this point, I well and truly give up with this pathetically awful service.