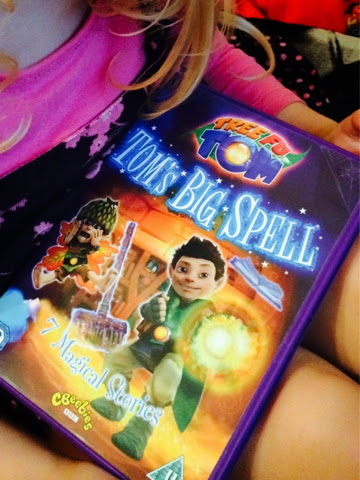 Both my children enjoy Tree Fu Tom, and I love that it's an interactive show where it encourages the viewers to play along and do the movements. The latest Tree Fu Tom dvd - Tom's Big Spell is an enchanting collection of 7 stories and I've been pleased to have this to hand during all these rainy days we keep getting! It also sits well for halloween season and half term!
My children love all the insect based characters and the adventures they get up to, along with that element of magic!

Tom appears to be a normal eight-year-old boy but when he puts on his magic belt and performs a special sequence of movements (known as Tree Fu) he transforms into a tiny but mighty, magical super-hero. Children are all encouraged to join in the Tree Fu magic moves.
Pre-schoolers will be spellbound as they join Tom, Twigs and all the other enchanting friends in Treetopolis on seven all-new exciting adventures. Tom is off to the castle for an exciting day at Spell School, but when he can't master the new spells straight away a drop of Magic Potion Lotion looks like the easy answer. However books begin to fly and broomsticks run riot as the newly enchanted objects turn naughty! Tom needs you to help him perform Big World Magic to restore calm to Treetopolis. The DVD also contains six other magic episodes including Bad Tom, The Cavern Coaster, Woodgrubs, Chuckleberry Tom, Don't Go Slowly and The Last Squizzle. So what are you waiting for? It's Tree Fu time!