I have to admit, I took my inspiration from kirstie allsopp's new "craft" book - which features a papier mâché snowman piñata - my thinking was - if you can do a snowman - I must be able to create a pumpkin!

Also, I wanted to replicate a pumpkin rather than do a real one for 2 reasons,
1) I felt that my 2 year old could join in more and 2) I don't actually have anywhere safe to put a lit pumpkin in the house at the moment!

I haven't done papier mâché for about 20 years and it was the first time Blake has done papier mâché so if your expecting something amazing - you might want to pop over to red ted art instead! (my fave children's craft blog)

Ok so firstly we blew up a balloon - a free one from mcdonalds - and covered it in olive oil - really you should cover the balloon in Vaseline but I didn't have any so I thought I'd try oil instead!

Then I divided a newspaper up - I split 1 page into 3 long strips and kept going until we had a large pile of paper.

To make the paste, we added one cup of flour and two cups of water to a bowl and Blake mixed it all up with a wooden spoon... which he looooved to do! 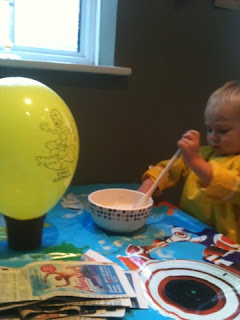 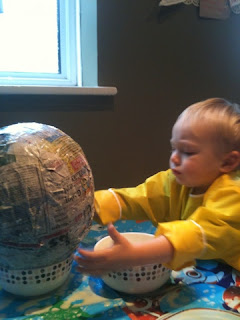 We dipped the paper strips into the paste and layered on the ballon until it was fully coated, Blake really enjoyed this bit!

It usually takes about 4 hours for a layer to dry, we left it overnight and did a second layer the next day.

Our intention was to paint it orange but we couldn't find orange paint anywhere! Our first point of call was elc but they didn't have orange, we also tried smiths, hawkin bizarre and that book shop next to patisserie vallerie in the glades (where we did buy a pack of cheap small felt sheets for 99p to use for the pumpkin's face features) . I'm guessing rymans down at Bromley south would have had some but I didn't fancy the walk.

As an alternative I decided to try orange tissue paper from paperchase.

I wasn't sure if a layer of orange tissue papier mâché would work but there's only one way to find out!

We left our orange pumpkin to dry over night again on the kitchen window. 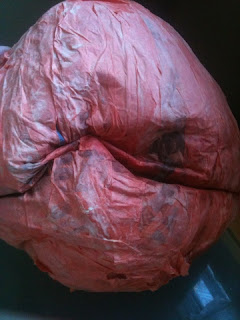 Unfortunately it was a sorry sight the next morning and I'm not sure what went wrong! The balloon had shrunk inside so maybe that was to blame for it's deformity, or maybe it was because that night was particularly cold and it didn't get to dry out properly on the side that was closest to the window, or maybe a third layer was one to many. Maybe the oil instead of vaseline ruined it? I'm not sure.


The orange tissue papier mâché layer did not work at all, not only was there the scary looking deformity but also, it just didn't look nice at all!

As a fix it job we but the pumpkin's best side forward and covered in orange tissue paper - just as it is and pritt sticked it on!

We then stuck on black felt cut outs for eyes, nose and mouth and a green card for it stem / hair, i did the cutting out and pointing, Blake did the sticking! 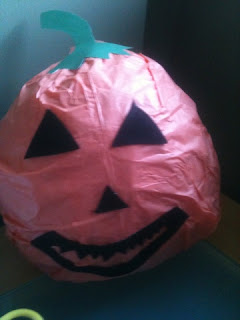 While I don't like to encourage trick or treating, I do love Halloween parties, dressing up and the fun it brings!

Halloween is a great time to do crafts with your little one and be a bit more creative with food too.

Loved getting messy and trying something new and this craft was easy for my two year old to do, he did most of this - even down to sticking the face details on. 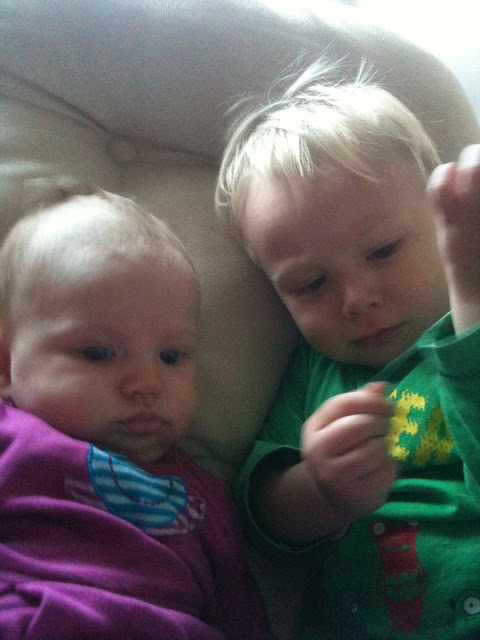 Lucky Maegan was sent a Cream waffle Shnuggle modern moses basket to try out and review and the verdict is that she loves it!

It's been a little godsend for us, as Maegan has a big brother, Blake who's 27months and the Shnuggle has been the way Maegan has been able to have daytime naps.

It's made from plastic rather than wicker so it doesn't creak like a traditional moses basket and the Shnuggle has ventilation holes in it's base so there is plenty of airflow. I love that it's easy to wipe down the whole basket. 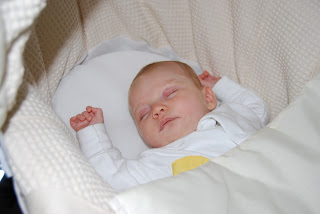 Maegan loved how cosy the Shnuggle is - its got padding underneath the waffle layer so when she wiggles and moves about she never catches herself and she loves to sleep with her head against the cushioning. The Shnuggle is suitable for up to 6months or until your baby can sit or roll unaided - I found it to be a generous size, and although Maegan is only 3 months, I have every confidence that the Shnuggle will last her.

We usually put the hood up while she sleeps, as I think it makes it a bit more cosier for her and also as a signal to Blake that Maegan is sleeping, if the hood is up, he's not to touch!

The Shnuggle basket also comes with a warm, thick matching coverlet and an airflow mattress (We've used mothercare fitted crib sheets to cover the mattress and they fit really well )

The waffle surround and padded lining stay in place with elastic and come off and on easily for washing - and they wash really well - no shrinking or mishapping.

The Shnuggle has soft cotton handles which can be removed - I've removed them for now as Blake likes to be "helpful" and has put them inside the basket a few times rather than leaving them hanging on the outside.

You can buy a stand for your Shnuggle if you wanted one and there are also some lovely blankets available from the website too or a mattress upgrade. Shnuggle is currently available in Cream Waffle, White Waffle, Dotty Blue or Dotty Pink. 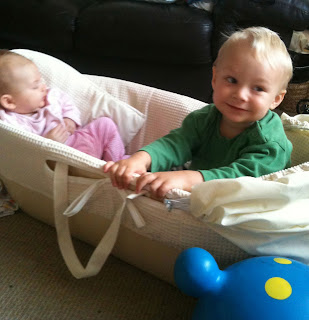 There isn't anything I would change about the Shnuggle, it's design and function is ace and there isn't anything you could improve on really. I would like to see more colour choices - more brighter ones and unisex ones as this basket is designed to last and also, it would be good to see Organic Cotton choice and maybe a natural mattress option.

There isn't anywhere to attach a toy so I've stitched a little loop in the hood to dangle Maegan's soft chime toy from which she loves to bat.

I would recommend the Shnuggle to a friend and it's good quality for its price - worth every penny.

Now - Ohh I  know this isn't what the Shnuggle is designed for or suitable for, but I couldn't resist - Blake climbed in and decided to do Row Row Row Your Boat with Meg - She is actually awake by the way! Was too cute!

The worst thing about parenting

This is a blog question prompt (I needed a bit of inspiration today!) and for me the answer is simply the noise!

I'm a quiet person, before having children I enjoyed nothing more than a good book and a hot choc - a nice bit of piece and quiet! Honestly, I rarely did the clubbing/pub thing and I love slippers as much as heels!

Having two children means this is a very rare thing indeed! It can get quite noisy in our house- from toys to tantrums! It can be rather hard when you just want a bit of quiet time but both children have decided that would be the best time to both scream and shout, I can't remember the last time I got to cuddle up with a book (other than the gruffalo) and just read - I've been reading the same book for 11 months and I have about a hundred pages to go (it's only got 350 pages to the whole novel). I used to go through a book a week or so!

If I'm completely honest - the worst thing about parenting has got to be the worrying! About your child's health/development/future/education etc I find my mind constantly worries! I have a history of childhood kidney disease, hubby has asthma, we both need glasses and between our families we have a plethora of allergies so I'm always looking out for signs. Where we currently live doesn't offer good primary schools so I've been looking into the prospect of homeschooling and worrying about the future education for my two year old! (blog post on that can of worms to follow).

And whilst I make a bit of a grumble about the noise ... My favourite sounds in the whole world have got to be my little ones laughter and chatter! ... And snoring!

So go on, what's the worst thing about parenting for you? 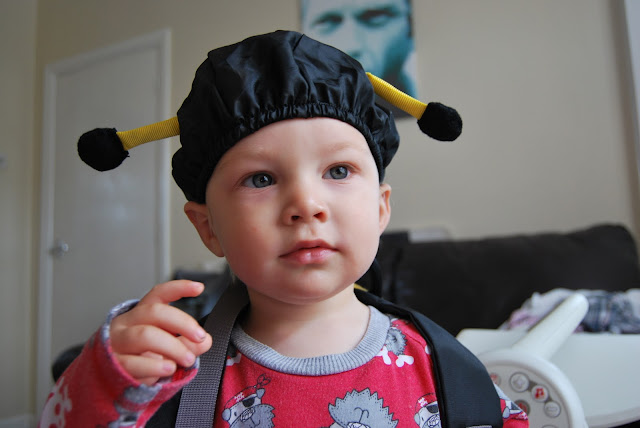