Day of the Toddler, Exploring Downham!

I just love seeing the world through the eyes of my two year old and how he finds joy in the most mundane things!

I thought I'd share with you a walk we had ... not my usual countryside style walk such as scadbury park, or knole park... but to the co-op in Downham!

Now, my local readers will need no introduction to Downham, but to those of you from further afield, Downham is not so nice, it's the sort of place that has a million 14 year old boys all wearing black hoodies (even on the sunniest of days) and each one of those 14 year old boys has a dog (and no, not sausage dogs, but staffies, rottweilers, things that looks suspiciously like pitbulls and those really ugly white dogs with the long pink noses) or at least I think the dogs are with the boys but none are on leads, disciplined or cleaned up after so who knows!

Downham also boasts lots of rubbish on the streets, lots of people smoking funny smelling cigarettes and a lot of toddlers who know the "f" word.

Joking aside, it's not all bad, every other person seems normal and we've met some lovely people in the area (we live just on the edge, first home and all that!) and there are some beautiful gardens, a fab leisure centre and library and a good sense of community, even the postie says hello.!

We had a little walk up to the post office and the Co-Op near the leisure centre and my toddler had a great time, first of all we saw a huge big yellow digger - one of his current fave things to spot so we stopped and had a look at it.

Then we saw a Fire engine and a few firefighters (My Mum would be jealous, she has a real thing for firemen!) I love how excited Blake gets when he sees these things! He couldn't stop telling me all about the digger and the Fire engine and to top it all off, we also spotted postman Pat's van and a police car... with sirens! Blake did a great neeenooorrr sound and kept asking for the cat... I'm guessing he was looking for Jess.

Just as we were about to turn the corner towards home, Blake spotted a bus, 2 hours later, Blake is still singing "round and round all day long"

So the me before kids would probably not even given these things a second glance but for a two year old boy, what on a walk could beat a huge yellow muddy digger, a massive fire engine, postman Pat's van, a police car with sirens and flashy lights and a big red bus!

Life is in the little details ... and the words "ohhh wow! look mama" 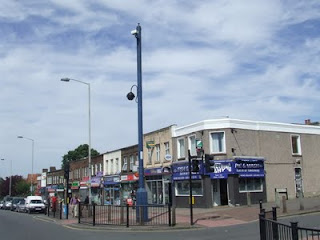