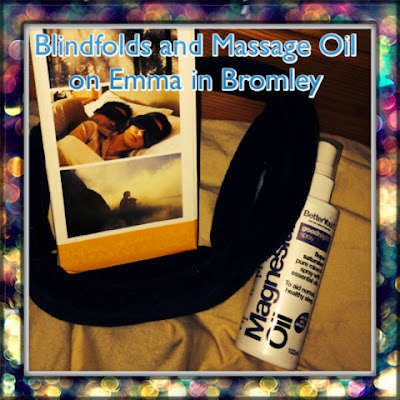 My children are still very young - 2 and 5 and sleep is a luxury in our house - an undisturbed night simply does not happen - between two children, night time toilet training, the local scooter boys and the massive fox problem (anyone else with urban foxes will know that they make a sound at about 3am which would make your imagination assume something awful and violent was happening!) I can expect to be woken at the very least 3 times a night - some nights this is far far higher! For example, the night before my five year old's first sports day, he was so excited that he woke no less than 9  times between 11pm and 1am, add to that my daughter waking twice and the foxes replicating the sound track to a hammer horror murder scene and of course the almightyly annoying desperately needing a wee scenario - I was definitely out of bed more than I was in it!

The problem is, sometimes it can take a while to fall back to sleep - or just as you are drifting back to sleep, another disruption takes place. I don't think I have a problem with initially falling asleep - let's face it, by the time I'm able to clamber into bed, I'm in some sort of desperate sleep craving zombie haze.
But after being wrenched from slumber for the 3rd time, I can often expect to wriggle about trying to get comfy with my excessively fidgety legs and over active mind for quite some time - I think I easily lose an hour just from trying to get back to sleep, or stopping my legs from fidgeting.

So I was intrigued when Silentnight's Sleep Clinic invited me to be included in the silentnight second part of research - investigating if sleep accessories can help! I answered a 5min questionnaire which included answering which sleep accessories I'd tried already and any i'd consider. I knew that as part of the research, I would be sent some sleep accessories to try and I was surprised when they arrived as they weren't ones that I'd tried before, nor were they the ones I'd said I'd consider trying!
I received a sleep mask and an oil spray. - oh there's a big part of  me who giggled like a school girl at being sent a blindfold and oil!

The sleep mask -  this is a tempur pedic eye mask - I've obviously heard of tempur mattresses and pillows but I didn't know you could get sleep masks made from them - these are brilliant - you get complete black out and extreme comfort from them - with a very soft covering. The before kids me would have relished this mask but the current me sleeps in glasses! Seriously, I'm extremely short sighted and I have to spring out of bed so quickly and regularly that I'm in the habit of sleeping in my specs! I know, naughty right? Thing is I can't even see clearly as far as my elbow and I can't be clattering about trying to locate glasses while rushing to shush a child before the other one wakes up! Hubby had a go of the sleep mask too and loved it - it's one I think would be a godsend while traveling (or in hospital) or for when I have my eye lasered - something I desperately wish for!

The Magnesium Oil Spray -  I'd never even heard of this little beaut before!
I tell ya, hubby has this on without even flinching but for me, every time, it makes my legs sting like crazy for about 10mins to the point where I think it's going to annoy me and just like that, it stops and my fidgety legs simply calm. It smells relaxing too and definitely solves the fidgets!

You should see the Silentnight sleep clinic!